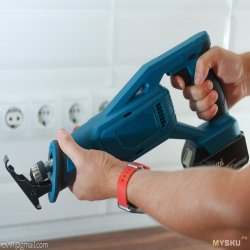 We continue the theme of the cordless tool for the Makita 18V battery and this time a review of the reciprocating saw. I already did a review of a similar tool once and the main difference is in the form factor of the tool. The reciprocating saw is handy for sawing pipes, wood and plastic blanks. Scope of delivery: saw and carrying case.

The carrying bag is a rag case designed for a richer set than what is inside.

According to the mold, the complete kit should contain two batteries, a charging station and the saw itself. At the same time, the regular Makita memory will still not fit into the slot.

The appearance of the saw is presented in its typical Makita cordless form. The massive body is made of thick plastic. Coloring, at the time of choosing the product, there was only black and blue, but now it is presented in other colors.

The handle has black inserts, but they are also made of plastic, not rubber as you might think. Trigger with smooth pressing and speed control, just above the lock toggle switch.

The battery tray is standard Makita and is located under the handle itself. The fit is a solid four overall.

With the battery installed, the reciprocating saw looks quite massive and weighs 2.66 kg.

The grip of this reciprocating saw is fundamentally different from that of its vertical counterpart.

Protective shoe and keyless chuck. Saw stroke – 32mm. The shank is universal, files are sold at any hardware store. The saw stroke of the vertical saw is 20mm.

Movement of the protective cover:

Disassembly is quite elementary, but rests on deep seats. Screws for an asterisk, I used elongated Broppe bits to unscrew them.

The internal layout is a collector electric motor (although BC is declared, or is it a kind of picture?), a massive gearbox, a button with small electronics (a thyristor with a radiator is located on the surface).

When
assembly, I used a screwdriver with a torque limit of 2N m, so as not to rip off the hats, but at the same time I still blew off 2 … As a result, the regular plasticine screws.

I bought the files on Ebay using a coupon, the model is Star s922ef. Includes 8 files: 4 for wood and 4 for metal.

As a test sample, we will take and remove a mulberry branch from the front garden of the house. For those wishing to speak out about further punishment, everything was agreed in advance and permission to cut was received.

Actual view from the camera before:

The mulberry tree at the base had a thickness of about 8-10 cm, while the saw did an excellent job. As for smaller branches, it’s even easier here, the saw bites in https://jiji.com.gh/medical-equipment/generator and cuts any branch pretty quickly. At the moment, most of the small branches around the house have been cut with this particular saw, and the vertical one (from the previous review) has been sent to help parents with the housework.

You can argue about the pros and cons for a long time, but on my own I will highlight that the use of a “horizontal” saw is much more convenient than a “vertical” one, due to the distribution of the load on the hands. After a long work of the last saw, my brush became numb, while from the operation of this one, there are no such problems. Also, this saw helped out more than once during the repair process, when it was necessary to file planks, metal and plastic tubes, and so on.
What I didn’t like was that the sawdust gets inside the case and fills the bag with it during transportation.
About the price, the store provided a coupon BGPToo15 for a discount on all electric tools.
That’s all for now, thank you all for watching!

The product was provided for writing a review by the store. Review published in accordance with clause 18 of the Rules